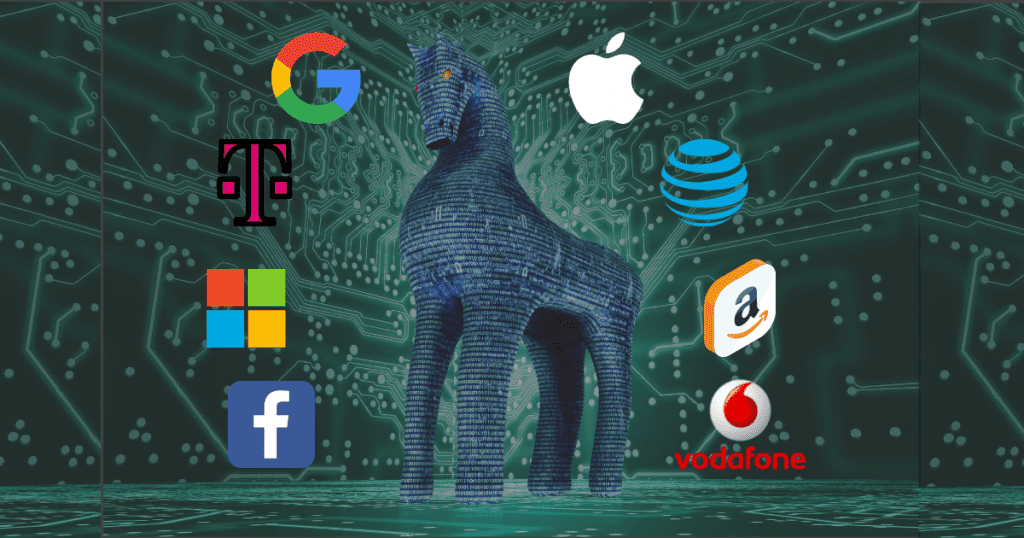 According to ancient history, the Trojan Horse was used by the Greeks to win the Trojan War. Legend has it the massive wooden sculpture was the brainchild of Odysseus, who hid inside the sculpture with an elite team of warriors. The Greeks “abandoned” the majestic work of art just outside Troy, and sailed away, faking a retreat. Then, when the Trojans pulled the horse into the walled city of Troy to keep as a trophy, Odysseus and his men emerged from it, opened the city gates for the rest of their army, and together they slaughtered their adversaries.

Today, we may all be reproducing this self-defeating drama. But rather than the Trojan Horse being a work of art fashioned from wood, it is the shiny, seemingly irresistible technology proffered by Big Tech—the 5G mobile service, the “free” social networking app that promises friends or lovers or like-minded political banter, a “smarter” Alexa, more accurate maps and all the other devices and software programs so many of us eagerly, indiscriminately bring into our lives.

Why would such products of Big Tech hurt, rather than help, us? Because they contain wildly proliferating programs designed to breach our privacy, plunder our data and, ultimately, destroy our freedom.

It would be one thing if the goal of the bloodthirsty warriors inside the Trojan Horse of Big Tech were only to monitor what you think about purchasing and then display ads that tempt you to complete that transaction. That’s a mere nuisance that most of us have noticed: We click on an advertisement for an item of clothing and that item of clothing seems to follow us via pop-up ads, wherever we go on the Internet. But the goal of Big Tech is much deeper and broader. It is to monitor and data mine everything you say on the phone and do on the Internet to have a crystal-clear window on everything you read, watch or listen to and everywhere you go, not to mention who you know, how you communicate with them and what you communicate to them – all with the ultimate goal of controlling and manipulating your feelings, your decisions and your actions.

Having breached your privacy (with your permission, no less) and gained access to the otherwise protected elements of your heart and mind, Big Tech doesn’t just watch and listen.  It deploys strategies to control what you listen to and read and watch next—by serving up hyperbolic, polarizing versions of opinions you seem inclined to embrace, surrounding you by people who share them and rewarding you for saying more of the things that please those people. In order to enslave you, Big Tech unleashes incredibly powerful forces that turn you into someone so powerfully partisan that they can compartmentalize you further and further, into a more and more pure consumer of what they feed you, sell you and “suggest” you do.

It’s already happening to you and everyone around you. The divide and conquer agenda of Big Tech has pitted females against males (Me, Too), older people against younger people, Black Americans versus Caucasian Americans (Black Lives Matter), people that wear masks against people that don’t wear masks. Did we all just suddenly decide we don’t like each other, at all? No, we were coaxed and brainwashed to see ourselves as part of one warring tribe or another.

Conflict is compelling. It drives people to click buttons and keys.  And that puts Big Tech in the driver’s seat to take you further and further where they want you to go, not where you want to go.  You become predictable. You become conquerable. You become ownable.

Once you’ve become a stereotype, a caricature of yourself, Big Tech then collaborates with government to keep you under surveillance or keep you under control or put you under arrest, if you take a few steps past the ever-shifting lines of compliance the government draws and then redraws, seemingly at random.

There is a way out. You have to keep the warriors locked inside the Trojan Horse and out of your life. And you don’t have to give up the great conveniences of technology to do it. You just need the means to use those conveniences without giving up your privacy or your freedom. And that’s what Volta Wireless is all about—giving you the tools to use technology, without being used by technology.

To use Volta Private Mobile, please Get a SIM.

Without a Volta SIM, you will be unable to use Volta Private Mobile.